You are here: Home » Blog » Badger Trust calls for meeting with DEFRA Secretary of State

Badger Trust calls for meeting with DEFRA Secretary of State 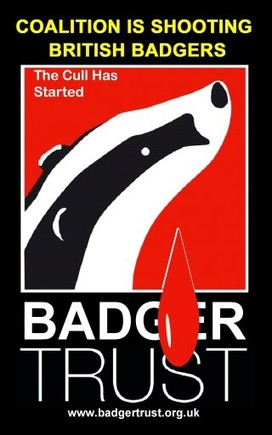 The Badger Trust is seeking an urgent meeting with the new DEFRA Secretary of State Elizabeth Truss ahead of its Judicial Review challenge on the badger cull, which will take place in the High Court on Thursday 21 August.

The Badger Trust is challenging the new DEFRA Secretary of State and Natural England over their failure to put in place an Independent Expert Panel for the planned culling of badgers in Gloucestershire and Somerset in 2014. The Trust contends such a panel is needed to oversee the design of data collection, its analysis and interpretation. Without this, there can be no proper assessment of the safety, effectiveness and humaneness of the culling operation, something that would be needed before any lawful decision to continue with further culls around the country.

Commenting on the Judicial Review hearing date and the request for an urgent meeting with Elizabeth Truss, Dominic Dyer, CEO of the Badger Trust and Policy Advisor at Care for the Wild, said

“I congratulate Liz Truss on her appointment but call on her not to make the mistakes of her predecessor by attempting to push ahead with further badger culling in Gloucestershire and Somerset this summer, without any independent assessment of safety, effectiveness and humaneness.

“Rather than shut the door on any discussion of this issue ahead of the Judicial Review challenge in the High Court on the 21 August, we would like to arrange for key representatives of the Badger Trust to meet with the new DEFRA Secretary of State as soon as possible.

“We would like to use this meeting to look at the key findings of the 2013 IEP report and how its recommendations will be implemented and to reach an agreement on a new independent monitoring panel for any culling operation in 2014, which could avoid the need for the High Court challenge on 21 August.

“I hope that Elizabeth Truss will accept our meeting request and show the public that she is taking a very different approach from Owen Paterson on this highly controversial issue, by entering into dialogue with the Badger Trust, as well as the National Farmers’ Union, on bovine TB control and the badger cull policy, within weeks of taking up her new Cabinet post.

“We have made it clear that whilst we believe that any culling undertaken this year should be independently monitored, our position remains that the culling of badgers will not have a significant impact on the incidence of bovine TB in cattle. This is a completely separate discussion.”

MPs were recently informed by Professor Tim Coulson a member of the Independent Expert Panel (IEP), that the former DEFRA Secretary of State Owen Paterson was very unhappy with the IEP report into the 2013 culls which was highly critical of their failure to meet reasonable standards of humaneness and effectiveness. Mr Paterson did not take the opportunity to meet the panel to discuss their findings.

“I think it was a major mistake by Owen Paterson not to meet with the IEP following the publication of our report into the 2013 pilot culls. The failure of DEFRA to continue independent oversight of data collection and analysis of the ongoing badger cull enormously compromises their ability to assess whether it achieves its critical aims.

“I fully support the Badger Trust’s call for an urgent meeting with the new DEFRA Secretary of State on this key issue ahead of the Judicial Review challenge on 21 August.”

Posted on July 21st 2014 under Badgers and Bovine TB, Leading For Nature, News & Press, Scoop.it. You can follow any responses to this entry through the RSS 2.0 feed. You can leave a response, or trackback from your own site.