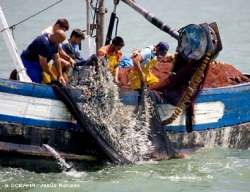 In a time of great public austerity, when EU countries are suffering huge pressure on their public spending, it would seem obvious to reduce waste. The Common Fisheries Policy is a great place to start.  Dead simple – stop overfishing, needless bycatch and wasting public money.  But on July 7th the EU Parlaiment’s Fisheries Committee voted for a policy that wastes money, food and healthy sealife.

This vote was important as it is the next step in determining the future of public financial subsidy to the EU fishing and aquaculture sector.

You have to be an optimist to fight the nature conservation corner; so often a long-fought battle can be turned around at the last moment and what looks like a clear outcome becomes muddied by politics, policies and parochialism.

On June 1st I wrote ‘Great News; concerted pressure and support from the public has changed EU fishing policy for the good.

My pleasure was a reflection of the view of marine conservation expert Joan Edwards who wrote in her blog om May 30th:-

The details of the deal are still coming through but it appears it is broadly positive and much better than we expected. It should allow our fish stocks to be rebuilt, has set legally binding targets to end overfishing by 2020 and should see a huge reduction in unwanted catch and in turn, discarding. Importantly, agreement has also been reached that fishing opportunities will be distributed using a range of transparent criteria including the consideration of the impact of the fishery on the environment.

This view also aligned with the leaders of both government and opposition.  Richard Benyon MP  spoke to the House of Commons on June 17th:-

The Parliamentary Under-Secretary of State for Environment, Food and Rural Affairs (Richard Benyon): On 14 June EU member states signalled their agreement to a deal on reform of the common fisheries policy. After more than three years of difficult and protracted negotiations, the agreement confirms that EU member states can support the deal brokered among EU institutions. All that remains is for the European Parliament to give its approval, which we expect in the coming months, and then the new CFP will be put into law.

I am delighted to report that my fellow fisheries Ministers, and EU institutions, have risen to the challenge of agreeing an ambitious reform of this broken policy. The CFP has become a totemic example of failure at EU level. Centralised micro-management and fudged objectives have left us with fish stocks and fishing businesses that are nowhere near as healthy as they could be. The public are rightly disgusted by the spectacle of edible fish being thrown back into the sea.

Mary Creagh (Wakefield) (Lab): Before I begin, I am sure the whole House will wish to join me in congratulating the shadow environment Minister, my hon. Friend the Member for Luton South (Gavin Shuker), and his wife Lucy. He celebrated his first father’s day yesterday with the arrival of a beautiful baby daughter.

I thank the Minister for advance sight of his statement, and congratulate him on his real achievement in reforming the common fisheries policy, 2014 to 2020. The deal was the culmination of three years of difficult negotiation and I congratulate him on surviving what he calls the “darker moments” of that process. We on the Opposition Benches have consistently called for ambitious reform of the CFP. These reforms are a good start. They end the disgraceful practice of discards, they decentralise and regionalise the CFP and allow member states to support small-scale fisheries, such as those in Devon and Cornwall, Kent, Norfolk and Suffolk; and they take a scientific approach to setting sustainable fishing levels away from the discredited system of total allowable catch with a transfer to maximum sustainable yield by 2020.

However, the nature of politics is such that what seems clear, simple and obvious is rarely straightforward.  On July 10th OCEAN 2012, ‘a coalition dedicated to ensuring that the 2012 reforms of the EU Common Fisheries Policy stop overfisihing ….reported

Brussels – Today the European Parliament’s Fisheries Committee narrowly voted in favour of reintroducing subsidies for the construction of new fishing vessels and fleet modernisation. These subsidies would maintain the oversized European fleet and contribute to overfishing. The Committee vote was on the future European Maritime & Fisheries Fund, EMFF, the third part of the reform of the Common Fisheries Policy package.

Markus Knigge, advisor to OCEAN2012.“We are outraged that the fisheries committee of the European Parliament has voted to misuse taxpayers’ money by financing overfishing. Using €1.6 billion to build up to 20,000 new fishing vessels will fuel overfishing and undermine a new Common Fisheries Policy. Furthermore, this decision clearly contradicts the EU’s international commitments to end the harmful subsidies that contribute to overfishing.”

This is not the end of this battle.  OCEAN 2012 stress that there is one last fight to overturn this flawed committee decision.

“Attempts to circumvent a full plenary vote were rejected, so now all 766 members of the European Parliament will have the opportunity to reverse the Committee’s vote and demonstrate to citizens that the EU is determined to recover fish stocks and the viability of the sector.”

Unfortunately, despite intense campaigning, members of the Fisheries Committee (by a majority of 1), voted to adopt a range of measures that will fuel overfishing. These include:

• Public subsidies of new, larger boats, which will not help reduce the pressure on our fish stocks. Furthermore, this measure will put the UK fishing fleet at a disadvantage as the UK Government has already stated that it will not match subsidies on new builds.

• Money for boats, regardless of size to get an engine overhaul.

• Aid for new boats for new fishermen to enter the industry.

• The use of public funds to act as an insurance policy for aquaculture that pollutes its waters.

Posted on July 17th 2013 under Leading For Nature. You can follow any responses to this entry through the RSS 2.0 feed. You can leave a response, or trackback from your own site.