You are here: Home » Blog » Thousands of TB cows sold as food 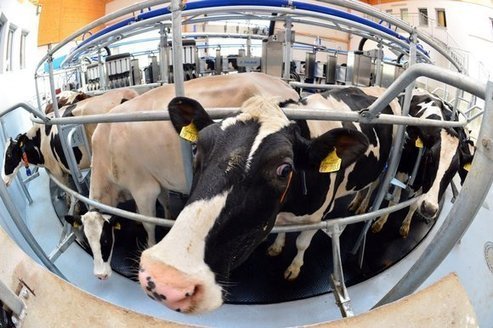 Thousands of TB cows sold as food||TENS of thousands of diseased cattle, slaughtered after testing positive for bovine tuberculosis (bTB), are being sold for human consumption by Defra, the food and farming ministry, an investigation by The Sunday Times has found.

The raw meat, from around 28,000 diseased animals a year, is banned by most supermarkets and burger chains. Tesco, for example, does not take it due to “public-health concerns surrounding the issue of bTB and its risk to consumers”.

However, it is being sold to some caterers and food processors, and finding its way into schools, hospitals and the military, or being processed into products such as pies and pasties. Some may also go into pet food.

Defra, which makes about £10m a year from selling the infected carcasses, says the risk of infection is “extremely low”

Defra’s reassurances contrast with recent warnings by its experts, who say rising levels of bTB in cattle are becoming a serious threat to human health. They have used such claims to justify a cull of tens of thousands of badgers which, they say, help spread the disease between cattle.
Explaining why the cull was needed, Nigel Gibbens, Defra’s chief vet, recently said: “If we do not maintain and improve our bTB controls . . . the risk of infection to other mammals and humans will inevitably increase.”
In an interview with the scientific journal Nature, Ian Boyd, the department’s chief scientist, also warned that bTB could “spill over” to pets and “potentially to humans”.
M bovis, the bacterium that causes bTB, can survive cooking up to 60C.
However, asked about the dangers from selling unlabelled meat from infected animals, which consumers might decide to eat “rare”, Defra said in a statement: “The risk to consumers from eating meat from TB reactor animals is very low.”||
Gordon McGlone‘s insight:

In my Leading for Nature blog I stress the need for our scientists to be able to express their opinions freely.  Prof Boyd and Mr Gibbens are senior officials within DEFRA.  It is difficult to make sense of this story when both officials have recently been stressing the risk of bovine TB to human health; if this is true how can unlabeled meat from bTB reactor cattle be allowed freely to enter the human foodchain?  Are these views those of senior scientists or senior public servants following their minister’s whims?

Some clarity is urgently needed.  Defra should publish its overdue Bovine TB control strategy as a matter of urgency and Mr Paterson should remove the restrictions that have been placed on the freedoms of our top government scientists to say what they think.  Perhaps then the public’s (and Mine) faith in DEFRA pronouncements might be restored.

Posted on June 30th 2013 under Badgers and Bovine TB, News & Press. You can follow any responses to this entry through the RSS 2.0 feed. You can leave a response, or trackback from your own site.