You are here: Home » Blog » Wildlife Wonders in Magical Meadows 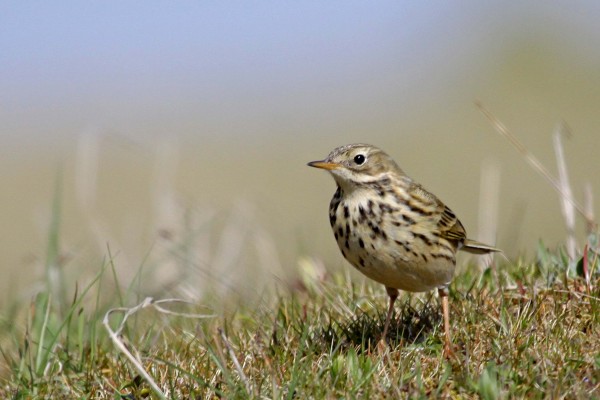 Attention-grabbing insects steal the show in summer – bright blue butterflies, burnished burnet moths and rattling grasshoppers – but how many of us look for other surprising stars of the sunshine?

The Wildlife Trusts offer 10 top meadow and grassland species to look out for.

The Wildlife Trusts’ Meadow Wildlife Weekend: 14/15 June 2014 is a great opportunity for discovery

Summer is by far the best time of year for exploring your local meadow – whether it’s an upland hay meadow, a river valley water-meadow, a patch of waste ground on the edge of town or a priceless chalk grassland nature reserve.  Now wildflowers are blooming, butterflies are on the wing, grasshoppers are singing and birds are raising their young.

Other sensational species to look out for include: 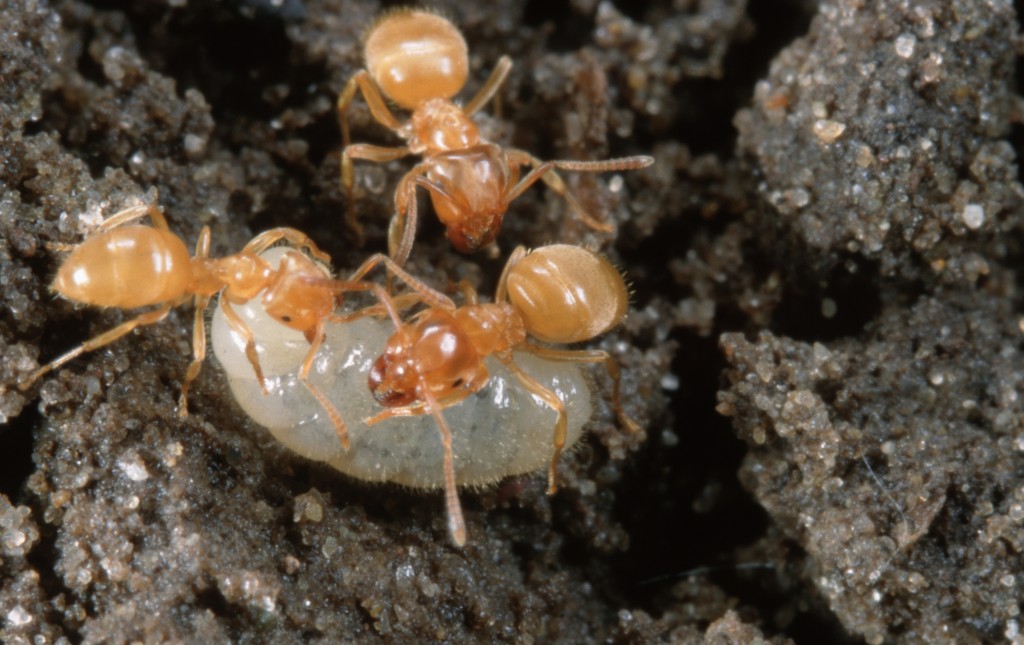 This distinctive insect is found in lowland grasslands all over the UK.  It lives in colonies of thousands of females, whose burrowing through the topsoil in search of their minute invertebrate prey tills the soil and aerates it.  The yellow meadow ant also contributes to the conservation of one of the loveliest butterflies of our chalk grasslands – the chalkhill blue.  Worker ants are attracted by a volatile chemical released by caterpillars of the chalkhill blue and often take the caterpillars underground, keeping them safe as they develop, unintentionally protecting them from predators.

This bird makes a virtue of being nondescript.  It has neither the buttercup crown of the yellowhammer, nor the carmine blush of the linnet’s breast, nor even the free-wheeling song of the skylark: it is simply a plain olive bird with a slim bill and black streaks on its pale breast and flanks.  But the meadow pipit is one of the commonest and most characteristic birds of rough grassland all over the UK.  In early summer males sit on fence posts and low bushes, giving their strident, pulsing songs, and are often moved to launch into exuberant parachuting song-flights. 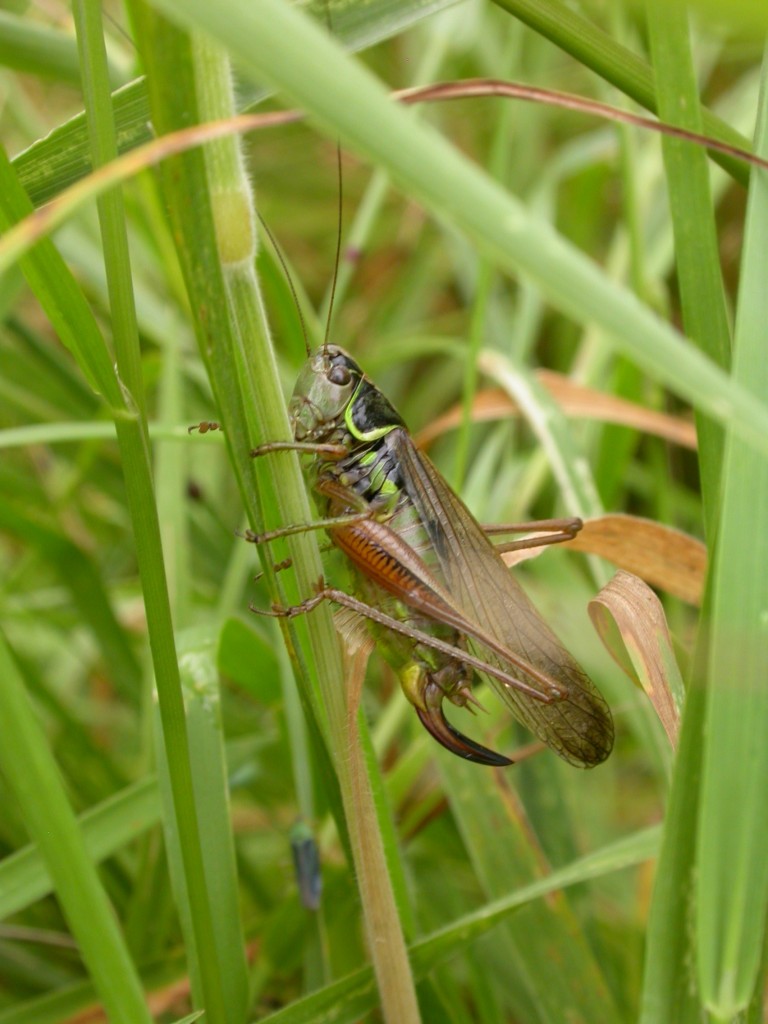 Some wildlife is best found by sound.  Bush-crickets are related to grasshoppers, though they have much longer antennae.  Several species live in UK meadows, including two which have recently colonised large areas of the country.  In the late twentieth century both Roesel’s bush-cricket and the long-winged conehead exploded across the southern UK and they are still spreading.  They are the ultimate kids’ insects as, without the aid of a bat-detector, their whining late summer songs (made by rubbing their wings together) are inaudible to most adults.  Once heard, the next challenge is to locate the green insect in the long grass without scaring it into falling silent. 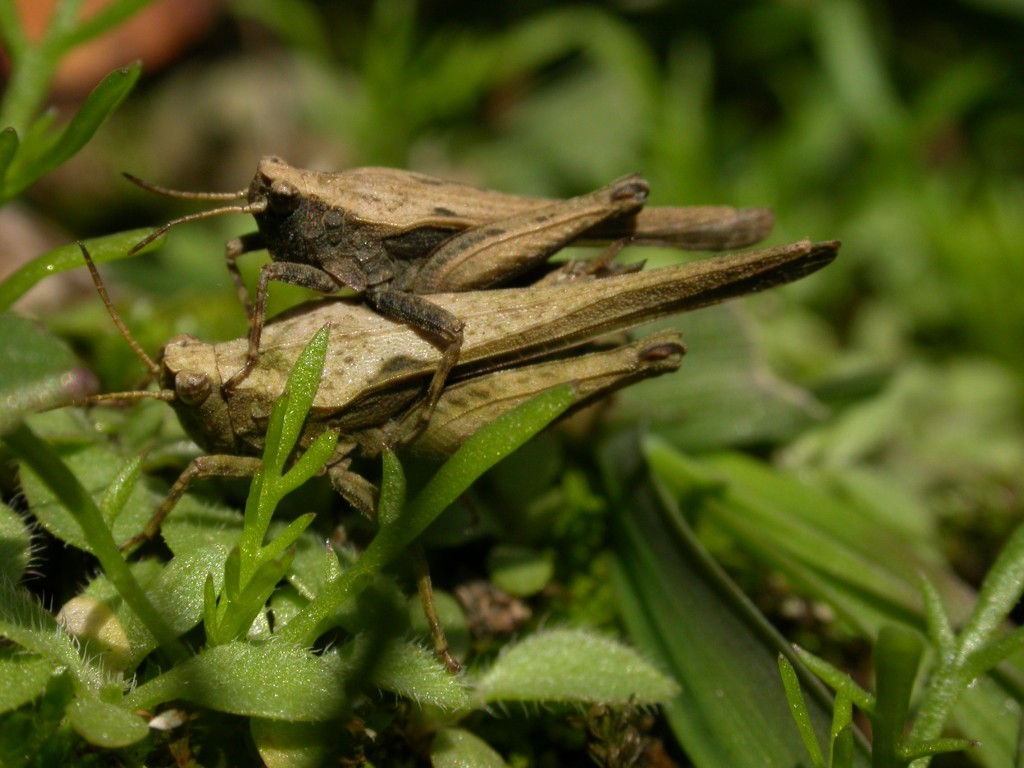 Though also related to grasshoppers, the tiny groundhoppers are not known to make any noise at all.  Like grasshoppers, their antennae are short and forward-pointing.  Groundhoppers differ from grasshoppers in that the roof-like shield which covers the thorax (known as the pronotum) extends the whole length of the insect’s body.  These minute hoppers favour bare, sunny places in grassland, very often muddy places close to water and, unlike grasshoppers which only overwinter as eggs, they live as young adults through the winter.  Two species, the common and slender groundhoppers, are widespread in the UK, though it takes sharp eyes to find them.

Everyone knows about rabbits.  Everyone sees them all the time.  But do we stop to look at them and their fascinating behaviour?  Though introduced to the UK, they have lived here for at least 1,000 years and are instrumental in maintaining several of our grassland habitats. Rabbits are social, matriarchal, territorial, fast-breeding and highly attractive to predators such as stoats, polecats and foxes.  What’s more, in summer their little youngsters are making their first forays into the world, so there is always something to see.  If only we took the time to watch them. 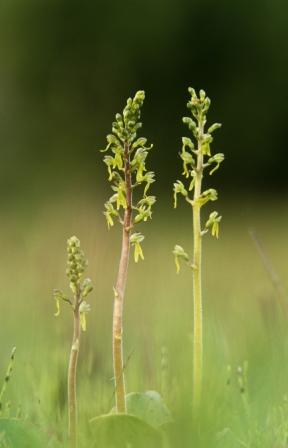 June meadows froth with brightly coloured flowers, each demanding the observer’s attention. Among the most dramatic are the numerous orchids which flower now: purple spires of marsh and spotted orchids in damp meadows and the enamelled buttons of bee orchids in sandy grassland. But everyone knows those; so why not look for an overlooked orchid?  Try to find the pale green blooms of a common twayblade, each flower on the spike shaped like a tiny man in a huge hood. You’ll know you’ve found a twayblade because of the two broad, oval leaves from which it gets its name.  It’s a common but overlooked species in grassland all over the UK. 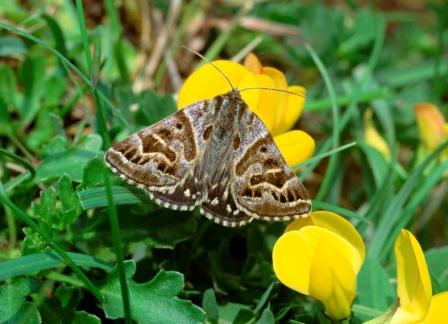 Meadows are great habitat for many species of moth.  Among the most widespread and the most delicately patterned is the Mother Shipton, so called because its pattern of cream and brown squiggles is said to resemble the mysterious but famously ugly sixteenth century prophetess of the same name!  The lovely adult moth flies by day in May and June, in many types of meadow all over the UK’s lowlands. Its caterpillars, also brown and cream, feed during the summer on clovers and grasses. 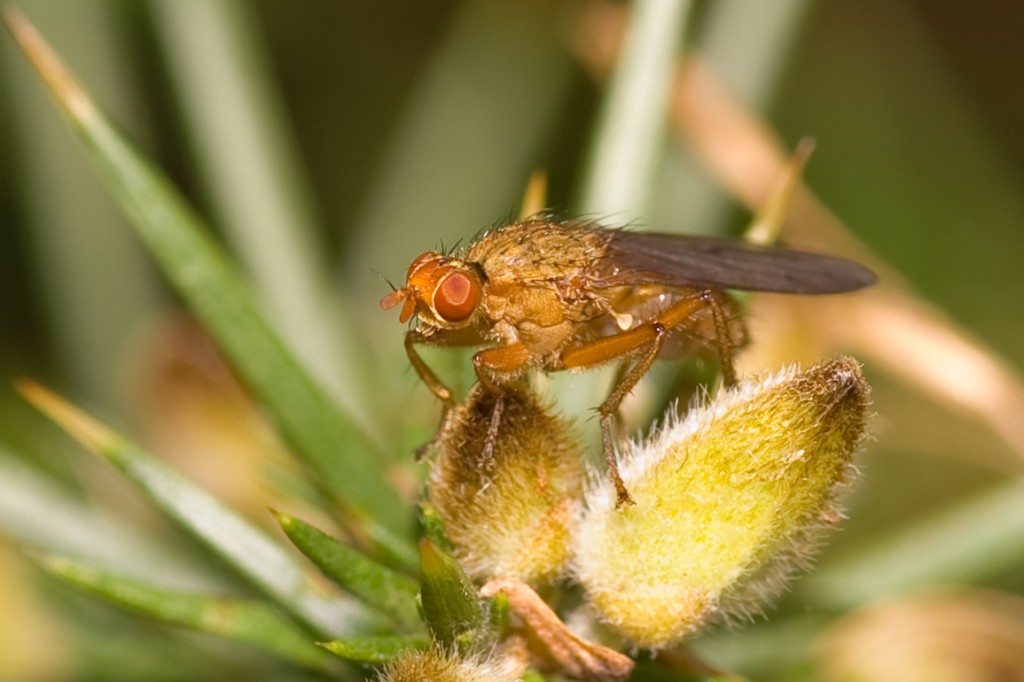 Meadows are usually managed by grazing livestock and where there are grazing animals, especially cattle, there is sure to be plenty of dung. Where there is dung there will be organisms that eat it.  In summer meadows one conspicuous insect on cow pats is this one.  It is the bright yellow males which spend most time on the dung, waiting both for females and for the other insects on which they prey.  Once mated a brownish female lays her many eggs, like tiny white scales, on the dung, on which the larvae will feed. 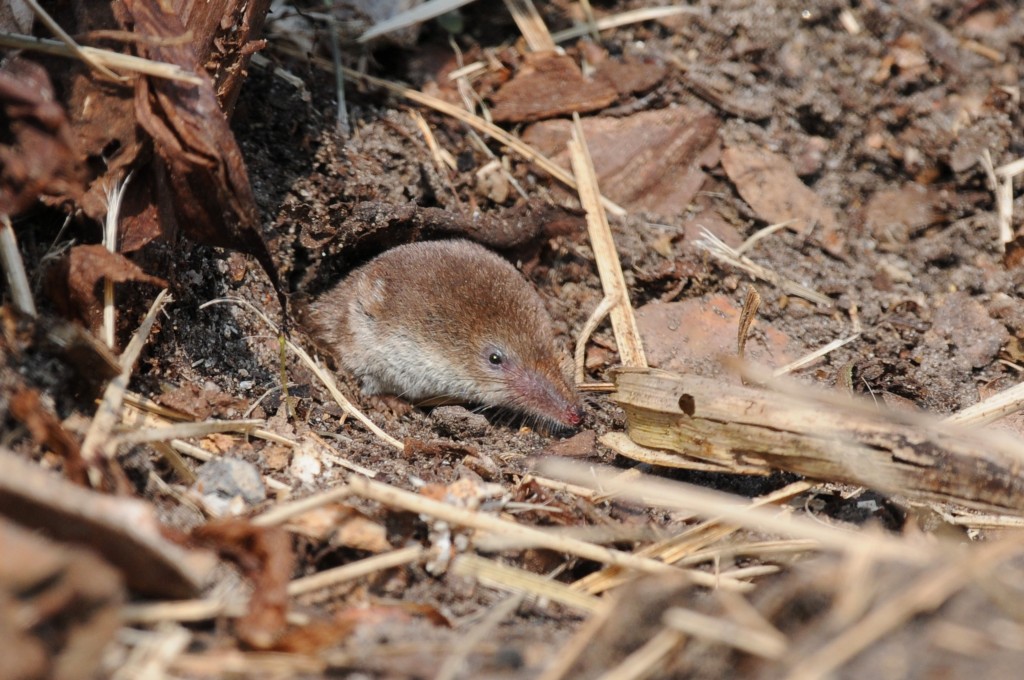 The feistiest of the UK’s mammals, shrews are secretive and difficult to see.  However, like bush-crickets they are easily heard by young ears as they bicker over territory in the long grass.  Three shrew species are found in the mainland UK, two of which – common and pygmy – can be abundant in meadows.  These tiny insectivores do everything fast: they rarely live longer than a year, but may have two or three litters of half-a-dozen young, which themselves are independent when just a month old.  Though their fizzy squeaks are readily heard, almost the only way to see shrews is to take part in a live-trapping event run by a licensed small mammal trapper. 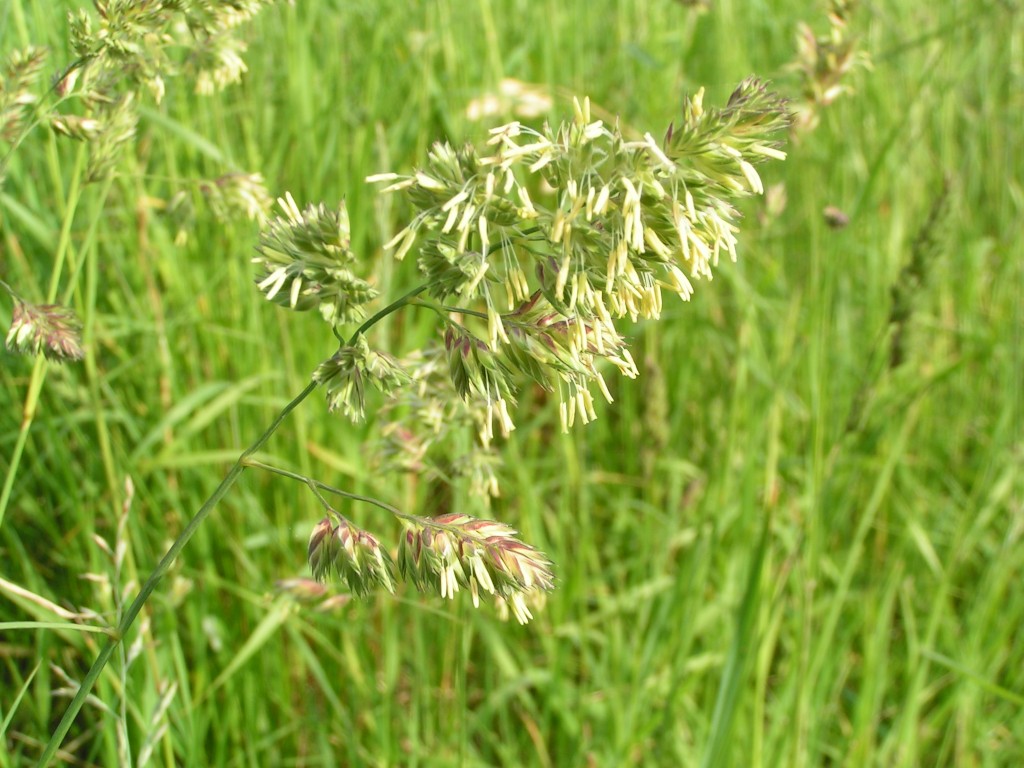 Meadows and grassland are – who would have thought it? – dominated by grasses.  Yet, somehow we ignore the grass; preferring to look at the pretty flowers or the brightly-coloured butterflies which live with them.  This summer why not look at the grass too.  It’s no surprise that in grassland there are many species; indeed wherever you are in the UK there are species which define your local grassland type.  So get out and look for the slender foxtails of timothy grass, the bristly heads of cock’s-foot, the shiny green leaves of ryegrass and many local rarities.   Since these habitats were largely shaped by centuries of grazing, conservation organisations continue the same management today. As meadows are more open than woods they generally favour sun-loving species of flower and invertebrate. Because of the way they are managed they are also great places to look for our tough native breeds of domestic sheep, cattle and horses.

For more information, see here   Wildlife Weekends For more about The Wildlife Trusts’ Wildlife Weekends, see http://www.wildlifetrusts.org/weekends
WildWalks
WildWalks is an online recording tool, established by The Wildlife Trusts in partnership with the British Trust for Ornithology (BTO).  It allows users to log wildlife sightings and map records of plants and animals across landscape-scale conservation schemes, known as Living Landscapes, whilst out enjoying a walk.  Routes can be created or selected from existing recommendations.  There are currently more than 300 sites from which to choose.  By involving members of the local community in undertaking repeated walks, we will develop a better understanding of how existing wildlife and how this is changing, in response to our landscape-scale conservation work.
How to get involved
Step 1: Register with WildWalks at www.wild-walks.org.uk
Step 2: Plan your WildWalk – follow our easy-to-use guide
Step 3: Take note of the plants and animals you see during your WildWalk
Step 4: Upload your sightings to www.wild-walks.org
Step 5: Plan a new walk, or repeat your walk, and create new wildlife recordings More information is available at http://www.wildlifetrusts.org/wildwalks
The Wildlife Trusts (TWT)  wildlifetrusts.org
There are 47 individual Wildlife Trusts covering the whole of the UK.  All are working for an environment rich in wildlife for everyone.  We have more than 800,000 members including 150,000 members of our junior branch Wildlife Watch.  Their vision is to create A Living Landscape and secure Living Seas.  Wildlife Trusts manage around 2,300 nature reserves and every year we advise thousands of landowners and organisations on how to manage their land for wildlife. They also run marine conservation projects around the UK, collecting vital data on the state of our seas and celebrating our amazing marine wildlife.  Every year we work with thousands of schools and our nature reserves and visitor centres receive millions of visitors.  Each Wildlife Trust is working within its local communities to inspire people about the future of their area: their own Living Landscapes and Living Seas.
Be Sociable, Share!

Posted on June 14th 2014 under Leading For Nature, News & Press. You can follow any responses to this entry through the RSS 2.0 feed. You can leave a response, or trackback from your own site.